‘The Irishman’ is just another smear of Italian Americans 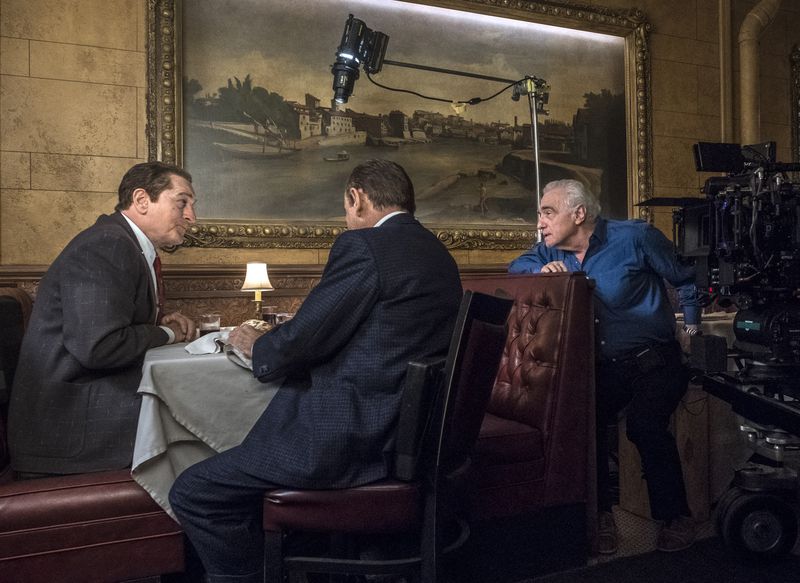 Contrary to the gushing encomiums of star-struck film critics, “The Irishman” is offal the Academy of Motion Pictures Arts and Sciences must refuse.

Though the movie has garnered 10 Oscar nominations, Martin Scorsese’s latest gangster oeuvre is neither an elegiac film noir nor a sweeping exposé of the criminal corruption undergirding our society.

Ostensibly based on hitman Frank Sheeran’s “I Hear You Paint Houses,” the director’s Netflix debut is yet another movie mashup of anti-Italian tropes, slurs and stereotypes.

“The Irishman” is an incoherently plotted, largely apocryphal tale about the disappearance of labor leader Jimmy Hoffa. In addition to concocting a conspiracy scenario linking burly goomba dons to the assassination of John F. Kennedy, the film fetishizes organized crime.

Organized crime is but a form of domestic terrorism for profit, but Scorsese revels in what the philosopher Karl Popper called “romanticized gangsterism.”

In a recent New York Times interview, Scorsese underscored his passion for the gangland life, citing it as the source of his silver-screen inspiration: “Well, it is glamorous and attractive, is it not?”

Like his fellow filmmaker Francis Ford Coppola, Scorsese traffics in filmic intolerance. Indeed, Scorsese, Coppola and Co. — including the likes of Robert De Niro, Al Pacino, Joe Pesci, David Chase and Chazz Palminteri — have institutionalized anti-Italian bigotry on the silver screen for nearly half a century.

“The Godfather” trilogy, “Goodfellas,” “Mean Streets,” “Casino,” “Shark Tale” (a kiddie mob movie), “The Sopranos” and “The Irishman” are nothing more than ethnic minstrel shows masquerading as art.

Contrary to the luridly intolerant worlds of Scorsese and Coppola, Anthony and Joseph Russo — the directors of the wildly successful Avengers films — have helmed aspirational sagas promoting tolerance, comity and, yes, adventure.

Moreover, the Russo brothers have created The Italian American Film Forum wherein a select number of Italian-American filmmakers will receive an $8,000 grant to illuminate diverse aspects of their noble heritage.

Rather than infringing on the freedom of expression of other directors, Scorsese should more closely scrutinize his own movies-— and the insidious role they have played in the demonization of a people.

Depicting Italian Americans as a congenitally violent underclass has morphed into a billion-dollar industry. Scorsese and his ilk have equated the real-world saga of Italian immigration with the mafia mythos — ignoring the mass lynchings, internments and widespread discrimination endured by the scions of Italy in their trek to America.

Writing some three decades ago, Alexander Cockburn decried “the childish mumbo jumbo about blood oaths, Sicilian brotherhoods and the like” that permeated the media, the courts and law enforcement officials steeped in cinematic mafia lore.

And 20 years ago, Clyde Haberman underscored this sad reality: “Among major ethnic groups that have formed the country’s social bedrock for at least a century, Americans of Italian origin may be the last to see themselves reflected in mass culture, time and again, as nothing but a collection of losers and thugs.”

From Galileo Galilei’s scientific method to Filippo Mazzei’s dictum that “all men are created equal” to Brunelleschi’s reinvention of architecture to Enrico Fermi’s atomic energy, Italians have been at the forefront of human progress.

In toto, the gifts of the scions of Italy are truly wondrous: the Pax Romana, capitalism, modern science, art, accounting and the rule of law.

Scorsese’s willful myopia doesn’t see such achievements. And as Beatrice Loayza noted in The Guardian, Scorsese’s films are hardly “gender progressive.” Indeed, the women in his movies “are too often caught in the crosshairs of the world of men, whether as victims or cunning culprits, as jezebels or slaves to love.”

Chances are, Scorsese isn’t likely to exalt Speaker of the House Nancy Pelosi; or Dr. Mariana Mazzucato, the cutting-edge economist who has authored: “The Entrepreneurial State” and “The Value of Everything;” or Dr. Carolyn Porco, the planetary scientist who was named one of the 25 most influential people in space by Time magazine in 2012.