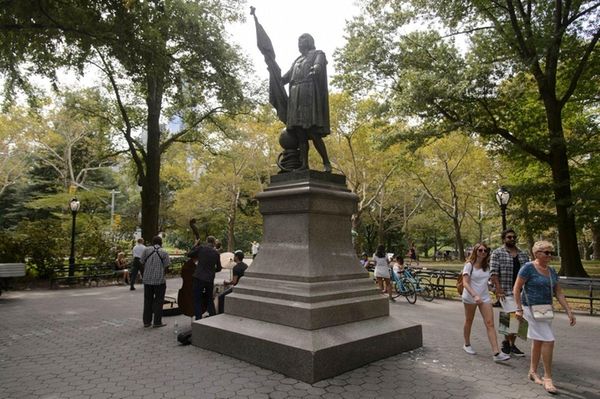 In the aftermath of the Charlottesville, Virginia, tragedy — and the movement to tear down so-called “symbols of hate” — will the revisionists divide us and undermine our national unity?

Toppling statues of Christopher Columbus is as incendiary as it is inane. History cannot be repealed.

If the rabble-rousers had their way, the nation’s capital would become Washington, DIP — the District of Indigenous Peoples. Imagine Columbia University shedding its namesake and morphing into Mohawk U. of the Iroquois Ivy League. And picture Buzz Aldrin’s reaction if NASA renamed Apollo 11’s Columbia Command module.

The radical assault on the Admiral of the Ocean Sea amounts to a declaration of war on history. Columbus was neither a treasonous Confederate general nor a nefarious neo-Nazi. Rather, he was a prime mover of Western civilization who remains an integral part of humanity’s global patrimony.

His voyages across the Atlantic led to the discovery of the New World, ushering in an age of exploration and a globalization of peoples, plants, microbes and cultures. The cultural richness and diversity of today’s Hispanic world would not exist without Columbus.

Columbus did not initiate the African slave trade. Nor did he plan the genocide of indigenous peoples. In fact, he commissioned Fray Ramon Pane to study the customs, religion and folklore of the Tainos, aboriginal inhabitants of the Caribbean.

The tribes were hardly monolithic. Some were genteel and hospitable. Others had a penchant for pillaging, plunder, human sacrifice and cannibalism. Columbus was even asked to protect some tribes from their more warlike enemies.

As for peoples of what is now North America, their ancestry is far more complex than first believed.

In National Geographic in 2013, Brian Handwerk wrote: “Nearly one-third of Native American genes come from west Eurasian people linked to the Middle East and Europe, rather than entirely from East Asians as previously thought, according to a newly sequenced genome.”

Perhaps the revisionists should heed Roman consul Marcus Tillius Cicero: “To be ignorant of what occurred before you were born is to remain always a child.”

As an Italian sailing for Spain, Columbus was caught in the crossfire among the Spanish crown, its conquistadors and the indigenous peoples. And his political and administrative skills may have fallen far short of his immense maritime abilities.

Yes, Columbus was a complicated icon. As Samuel Eliot Morrison noted, “He had his flaws and his defects, but they were largely the defects of the qualities that made him great — his indomitable will, his superb faith in God and in his own mission.”

Though he never set foot in the heartland of North America, Columbus has long been revered in the United States. Indeed, our Pledge of Allegiance was penned by Francis Bellamy to celebrate the 400th anniversary of Columbus’ first voyage.

In “Columbus: The Great Adventure,” Paolo Emilio Taviani wrote, “Christopher Columbus of Genoa was the greatest and most spectacular actor at the beginning of the modern age.”

He enlarged the world, altered the course of human events and made possible “the last best hope of earth” — the United States of America.

Rosario A. Iaconis is chairman of the Italic Institute of America and an adjunct professor in social sciences at Suffolk County Community College.